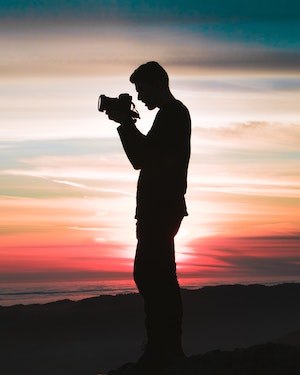 Gil Riggs (69) passed into eternity July 7, 2021, at EGRMC.   He had been battling declining health for over a year caused by two bouts of COVID that created serious health complications. Although he had been immobile for over a year, he remained optimistic and continued his infectiously positive attitude until the end, which made taking care of him less of a burden for his wife Kathy. Gil was born in Evans County on December 14, 1951, to W.D. (Dryfus) and Eunice Newton Riggs.  He graduated from the old Claxton High School in 1970 and found his way to Bulloch County. Gil enjoyed various occupations along the way before discovering his true passion, photography.  His career was spent in the photofinishing business where he founded Regency Photo.  For over 30 years, he preserved precious memories for generations of families through photography.  In addition, he inspired, mentored, and encouraged scores of hobbyists and professional photographers. He loved being a small business owner and absolutely LOVED his customers. He always said, 'I KNOW I talk too much….'.  But what he said was usually important, interesting, and most often just what the person listening needed to hear at that exact moment in their life. He retired from the photography business, but never stopped offering advice and instruction for cameras and technique in addition to serving a few of his special customers. Not one to sit at home, Gil discovered his second career by becoming a bus driver for the Bulloch County Schools.  Like everything Gil did, he worked to become the best bus driver in the system.  Soon he was training other drivers and competing in bus driving competitions, where he took the top spot and earned the title, “Road-e-o King.” The real win, however, was the love “Big Gil” had for all the children lucky enough to ride his bus.  Even though he had to retire from driving due to his health, his goal was to return to the driver’s seat once more. Gil married Kathy Newsome on July 23, 1972.  They were blessed with two sons, Joshua (Josh) Lewis, and William (Will) Evan. Gil was 'born' a Methodist, baptized after marriage into the Baptist faith and later swam in the Pentecostal stream!  He was privileged to have great ministerial support in his life, and he called Reverend Johnny Ray Jones, Holy Zion of Metter, his pastor. He loved ministry outside the four walls of a church and deeply enjoyed being a member of the Christian Motorcycle Association and Redeemed Riders.  There was nothing that blessed him more than riding his Harley for Jesus. He witnessed to everyone and glory be to GOD, there are scores in heaven due to their encounter with Gil!  Gil was greatly blessed by the prayers and partnership with Abba Father International fellowship, nightly with Chaplain John McTernan with members all over America, New Zealand, Israel, Pakistan, Kenya, India, Sri Lanka, Nigeria and many more.   His name was called out NIGHTLY by Gods greatest soldiers and warriors and this touched he and Kathy more than can be imagined.  He also participated in the Lavada Ministry prayer line each evening. He was even called on to host when Kathy went to the prison ministry revival service and Martha Briceno of California was not available.  This was a great miracle that we all cherish now. Each salvation was a mountaintop experience for him. Gil was predeceased by his parents, brother Ronnie, his mother-in-law Grace Overturff and sister-in-law Lynn Newsome Hubbard.

If you were touched by Gil in some way, the family would love for you to join them for a “Celebration of Life” on Sunday, July 11, 2021 at 2:30 p.m. at Uncle Shug’s on Main (formerly R.J.'s Steakery), 434 South Main St., Statesboro, Georgia. This will be a very informal celebration.

In lieu of flowers, donations to Lavada Ministry, 240 N. Main Statesboro, Ga. 30458 would be a welcomed honor to help fund their global outreach.

Low Country Cremation and Burial are in charge of arrangements.

To send flowers to the family or plant a tree in memory of Gilbert Allen Riggs, please visit our floral store.